A Conversation with Carlie St. George (May 2020) 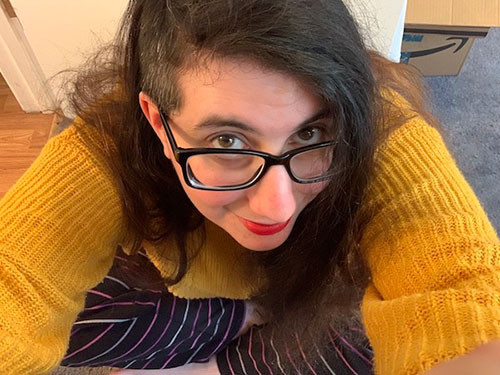 Carlie St. George is a Clarion West graduate whose work has appeared in Nightmare, The Dark, and Strange Horizons, among multiple other publications. She is particularly passionate about horror movie tropes, fandom tropes, and fairy tales, and she lovingly dissects movies, television, and other nerdy things on her blog My Geek Blasphemy.

Alvaro Zinos-Amaro: It appears that for most of your Radiohead-song-to-story pairings, the songs were chosen after the fact. Has the song (maybe with "2+2=5" and the story "Spider Season, Fire Season") ever come first? If so, could you talk about what reversing the creative process was like?

Carlie St. George: I’m afraid not. I ought to try that at some point, picking a song and seeing if I can pull a story from it, especially for the songs that keep almost-but-not-quite making the cut. “Paranoid Android” and “Decks Dark” are prime candidates for that. “Karma Police” is just waiting for a revenge-horror story, and there’s a lot of violent potential in “You and Whose Army,” too. But I’ll admit, I’m not sure I’d be great at working from a music-first approach. “Paranoid Android,” for instance... that feels like dark, melancholic SF: emotional instability, maybe a power play, some kind of violent confrontation. But that’s really more of a mood than an idea, and I don’t generally approach stories mood first.

AZA: You were kind enough to create a Radiohead pairing playlist. What's your relationship with playlists, and lists in general?

CStG: My process is, as ever, wildly inconsistent, so sometimes I’ll come up with whole playlists while working on certain stories, while others have none. I often listen to music when I write, but sometimes I need quiet. Sometimes, I can’t listen to music with lyrics (I have a very long “Mostly Instrumentals” playlist I often write to), but sometimes I need something I can sing and bop along with, just to keep energized. In general, I find lists weirdly soothing. I make them all the time: reading lists, weekly to-do lists, lists about favorite movie endings and fanfiction tropes. I once started making a list about various TV ships, and immediately had to break it up into the following subcategories: Master Ships, Good Ships, Meh Ships, Problematic Ships that I Still (Or Once) Loved, and The Anti-Ship. Lists make everything easier to break down and analyze, and there’s nothing I love more than overanalyzing pop culture.

AZA: Some folks are finding relief from the current pandemic in "feel-good" entertainment, while others are being comforted by horror and dystopias. How has our situation influenced your exploration of art and pop culture?

CStG: I think I tend towards the “feel-good” end of the spectrum, although some of my feel-good entertainment is horror. It’s difficult because, in many ways, my personal day-to-day hasn’t changed all that much. I’m lucky enough to still have a job, and it’s a job I can’t do from home, which comes with its own set of benefits and drawbacks. I find that I’ve flip-flopped a LOT between being “incredibly stressed out” and “basically fine” over the last two months.

But yes, in terms of stress and escapism, I tend to go for more light-hearted entertainment (Nailed It! is a great, silly pick-me-up) or sink deeply into some particular fandom. (I shudder to tell you how much Untamed fanfic I’ve consumed in the last two weeks.) I wish I could say I’ve managed to direct all my frustration and fears into my own writing, but that has proven... inconsistent at best. Focus, apparently, is not to be had during a pandemic.

AZA: The movie and TV review archives on your blog cover an incredible range of material, all of it observed through a keen analytical eye (and plenty of humor). Was part of the impetus for analyzing tropes wanting to hone your own creative process, or was being analytical about stories something that inspired you to want to fashion your own in the first place?

CStG: Honestly, I’m not sure that either is quite right. I think analyzing tropes has improved my own writing, certainly, identifying which ones I connect with and which I dislike and why... but I also couldn’t say I started analyzing tropes for that particular reason. Likewise, I’ve definitely written stories that have consciously explored tropes: both “If We Survive the Night” and “Some Kind of Blood-Soaked Future” are approaching the Final Girl from different perspectives... but also, I’ve been writing stories (or at least trying to) since I was five. I’m not sure it’d be accurate to say that the need to analyze came before the need to create.

I examine tropes because I find them fascinating; I love to identify and discuss patterns across various narratives. And I love to write about stories because I love to talk about stories, only it’s infinitely easier for me to write than to talk. Out loud, everything is jumbled and nerve-wracking, and I have difficulty getting my point across. Writing helps me process my thoughts, and editing generally makes them more or less coherent.

AZA: If you consider that a movie does well what it sets out to do, but whatever that thing is leaves you kind of cold, how do you tend to assess it and rate in a review?

CStG: That’s always difficult. I know I’m not entirely consistent when it comes to ratings; ideally, any ratings system would be based on some kind of objective metric, but there’s just no real way to be 100% objective about art. I think, then, that the best thing to do is just to be open and honest about your assessments: acknowledge that, sometimes, what a creator wants to do with their story isn’t what you came to that story hoping to find, and that while you can appreciate A, B, and C, overall, the whole thing doesn’t work for you because of X, Y, and Z. In any story, I think it’s important to try and find the things that work well; that being said, no one should feel obligated to enjoy or be excited by something that just doesn’t move them.

AZA: You've described dream sequences as "basically the music videos of prose fiction." Can you talk a little about some of your favorite music videos, if you have any, and what role music videos played for you growing up?

CStG: Oh, I used to love watching music videos when I was a kid. We only had VH1, sadly, and not MTV, which was a great tragedy in my life; nevertheless, I’ve always been bemused/fascinated by how a music video can work as its own story or piece of art, often while having little to no relation to the actual song lyrics. In that way, it’s kind of like a story prompt. 18 people will write 18 wildly different stories for the same prompt; presumably, they’d each come up with 18 wildly different music videos for the same song, too.

Some favorite music videos when I was young: both “Mary Jane’s Last Dance” and “Don’t Come Around Here No More” by Tom Petty and the Heartbreakers, “Scream” by Michael and Janet Jackson, “Ironic” by Alanis Morissette, and “Girls Just Wanna Have Fun” by Cyndi Lauper. Some favorite videos now: “This is America” by Childish Gambino, “Nobody Speak” by DJ Shadow feat. Run the Jewels, “Nails, Hair, Hips, Heels” by Todrick Hall, “Afterlife” (the live video) by Arcade Fire, basically anything by OK Go, and, of course, “Weapon of Choice” by Fatboy Slim.

AZA: In the future, can we expect to see you use selections from Thom Yorke's solo work--like a cut from his Suspiria score--for story pairings? How about film scores by Jonny Greenwood, or some of his classical music (in case you're taking requests, "Water" is one of my favorites!)?

CStG: You know, it’s funny, because I’ve absolutely considered using Thom Yorke’s non-Radiohead work before, but thought that might be considered cheating. By who, I don’t know. I can be peculiar about that sort of thing. Still, I definitely might take this question as implicit approval to cheat in the future because, at some point, I’m definitely gonna wanna use that Suspiria score. Also, songs like “Rabbit in Your Headlights” or “... And the World Laughs with You.” I hate to admit this, but up until now, I’d been completely unaware of Jonny Greenwood’s work outside of Radiohead. Now that I’ve looked up “Water,” man, it’s fantastic. So, thank you!

AZA: Lastly, in closing, do you have any words of hope--or despair--during these trying times?

CStG: I don’t want to add to the despair, but I’m not always great at verbalizing hope. How about this: sacrifice is something you do for others. It’s not something you should ask, expect, or demand of people to do for you. If your position is that the elderly, the immunocompromised, or the poor should have to risk their lives and/or die so things can get “back to normal?” You’re the villain in this story.